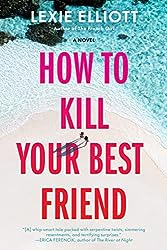 Release Date - August 17, 2021 College buddies Bronwyn, Georgie, and Lissa have been inseparable for years. When Lissa dies while swimming in a cove off the private island she and her husband own, it's hard for Georgie to comprehend how such a strong swimmer would have drowned. Bronwyn is equally stunned. As they reunite with their significant others and children on the island where Lissa died, both Georgie and Bronwyn start to wonder what they've missed. Someone is lurking in the shadows and doesn't seem to have friendly intentions, yet a storm is moving in, so as the danger heightens, no one can leave. Chapters in How to Kill Your Best Friend switch back and forth between the "murder" lessons, Bronwyn's insight, and Georgie's insight. I didn't love the changes, as I felt it dragged the pace down, especially in the first quarter of the novel. Once I started skimming the different ways to kill a friend, I found the book became more enticing.  I als
Post a Comment
Read more 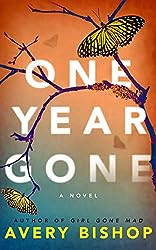 Release Date - August 10, 2021 What a ride! One Year Gone is a gripping novel that's told by Jessica Moore, mom of the other narrator Bronwyn. It starts when Jessica gets a middle-of-the-night message from her daughter. Bronwyn disappeared a year ago, and Jessica has been desperate to learn the truth behind Wyn's disappearance. The police are convinced Wyn ran away, but Jessica wants answers. What would make Wyn leave? The texts Jessica receives put a whole new spin on the case. Wyn claims she was kidnapped by a member of the police, but she doesn't know where she is. That makes it very hard to investigate anything as the kidnapper could be anyone on the force locally or on the other side of the country at this point. Jessica knows one thing. She will do anything to bring her daughter back. There are plenty of possible kidnappers throughout One Year Gone , and that keeps you on the edge of your seat. I had my suspicions. At times, I thought I had nailed it. As it plays
Post a Comment
Read more

Such a Good Wife by Seraphina Nova Glass

Release Date - August 10, 2021 Seraphina Nova Glass' latest thriller shares the story of Melanie Hale, a stay-at-home mom who has her hands full with a teen daughter and autistic son. She does a lot to meet his needs, while also being there for the rest of her family. When her husband encourages her to go to a local writing group's meetings and have time to herself, she takes him up on it. At that first meeting, she meets a talented romance author. Luke is handsome, charming, and interested in her. She makes a mistake and has a brief affair. Things go horribly wrong when she goes to break things off with him and finds him dead. Melanie doesn't hang around. She runs from the scene, makes an anonymous call to 911, and hopes she can move past it. It's clear that someone knows, however, and will make her pay to keep her little secret. Such a Good Wife is addicting. I had a hard time putting it down as secrets were revealed. Melanie works tirelessly to cover her tracks an
Post a Comment
Read more

The Therapist by B.A. Paris

Release Date - July 13, 2021 When her boyfriend gets an amazing deal on a home in the exclusive gated community called "The Circle," Alice is happy to start a new chapter in her life. She and Leo are head over heels, and this is the chance for them to live in London together.  During a housewarming party, Alice meets one of her new neighbors and gives him a tour of their remodeled bedroom. The problem is he isn't who he says he is. He's actually a private investigator hired to look into a murder. This begins the foray into a shocking truth that has Alice questioning everything. Leo never told her he got the house for a steal because Nina Maxwell, a popular therapist, was murdered in the upstairs bedroom. Leo lied to Alice, and she's not sure she can forgive him. As Alice begins to explore Nina's murder, she can't help but become more involved than she should. Nina's husband may not have been the killer. If he wasn't, Alice could be putting herse
Post a Comment
Read more

Release Date - August 3, 2021 After her dad's death, Hailey McBride is pushed to move in with her aunt and her aunt's domineering boyfriend, part of local law enforcement. Like many other young women in the area, Hailey disappears. The difference is Hailey ran away after learning something and is hiding up in the woods. A year later, Beth Chevalier comes to Cold Creek hoping to find answers regarding her sister's murder. Her sister was Hailey's friend and Beth wants answers. Who is killing women along the dark roads in Cold Creek and how can they stop these murders? Dark Roads is fiction but based loosely on a number of killings. Within Chevy Stevens' novel there are plenty of twists that readers may or may not see coming. I wasn't surprised with the big reveal, so it wasn't shocking. That didn't stop me from wanting to stop reading. I was so engrossed with Hailey's situation that I couldn't put the book down. Beth is an addict, so she's
Post a Comment
Read more

The Dating Dare by Jayci Lee 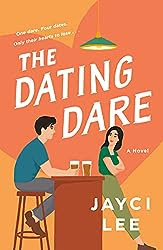 Release Date - August 3, 2021   After being horribly mistreated by a college boyfriend, Tara Park has lived by one rule. Quick flings are okay. Falling in love is off the table. She's busy running the family-owned brewery. When her best friend's new brother-in-law hits on Tara during the wedding, she isn't sure what to make of it. But Seth is about to move to Paris, so he could be a bit of fun for the next few weeks. Seth Kim enjoys his playboy image, even if it isn't exactly accurate. He's been burned before and is happy doing what he does. He can't help but notice Tara during the wedding. He knows he's soon leaving, so his dare seems perfect for a quick bit of fun. She has to let him take her on four dates of his choosing with obligations beyond having fun together for a few weeks. Neither of them expected that their feelings will start to turn towards something else. With Seth soon leaving, he's not sure he's ready for his new relationship to co
Post a Comment
Read more 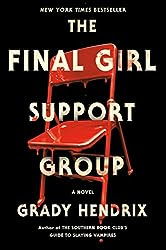 Release Date - July 13, 2021 The Final Girl Support Group is classified as "Horror Suspense." I'm not sure I agreed with that. The main characters are all victims who have survived brutal attacks. These five women meet up in a support group that's designed to help them get on with their lives. These "Final Girls" all have their strengths and weaknesses, and they do what they can to get on with the day. Then one day, one of the women misses a meeting. That throws the group off kilter. When it appears someone knows about them and plans to eradicate them one by one, the women are prepared to fight like they've never had to fight before. The Final Girl Support Group pays homage to horror movies of the past. I found myself reminiscing about some of my favorite horror movies from the '80s. From Freddy to Jason to Michael, I've cheered on some horror movie villains over the years. This brought me back to those movies and experiences. That said, I n
Post a Comment
Read more
More posts