Showing posts with the label where I left her
Show all

Where I Left Her by Amber Garza 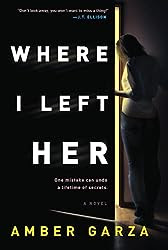 Release Date - August 24, 2021 Whitney's 15-year-old daughter, Amelia, has been especially moody as of late. In addition to the moodiness, her daughter is more distant and secretive than usual. When Amelia asks to go to her friend's house for an overnight, Whitney agrees and even forgoes her usual request to meet the girl's parents. Instead, Whitney drops Amelia off, watches Amelia head inside, and takes off.  When she doesn't hear from Amelia the next morning, she's concerned and heads to Lauren's house. There, she discovers an elderly couple lives there. They're convinced she has the houses mistaken, but Whitney remembers the roses lining the walkway. Panic starts to take over as Whitney realizes her daughter has vanished, and she has no idea what Lauren's last name is, so she can't give the police much information, either. Where I Left Her goes back and forth between the days leading up to Amelia's disappearance and the hours after. You qu
Post a Comment
Read more
More posts