Showing posts with the label vera kurian
Show all 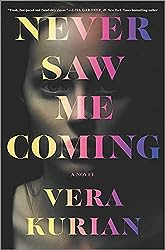 Release Date - September 7, 2021 Chloe Sevre isn't the young woman you'd expect. She's an honor student and newly arrived college, but she's also one of seven young adults with psychopathic tendencies who agree to be part of a secret college-run study. What no one knows is that Chloe chose this school to get closer to Will, a former friend she's planning to kill. Before she can take the steps needed to murder Will, a college student is murdered. Then, a second student is murdered. Someone is killing the teens in the study, and Chloe needs to stay on her toes if she's to avoid being next. Never Saw Me Coming keeps you on your toes. While I was addicted and needed to know the outcome, there were also things that bothered me. The story jumps from Chloe to other members of the study. There's the addition of romance, which adds a break from the suspense and mystery. The bounces from Chloe to the others ended up being somewhat distracting, but I had to keep readi
Post a Comment
Read more
More posts