Showing posts with the label one christmas wish
Show all

One Christmas Wish by Brenda Jackson 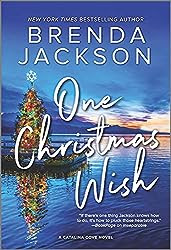 Release Date - October 26, 2021 One Christmas Wish is the fifth book in the Catalina Cove romance series. I've read a couple other books in this series. I adored Vashti and Sawyer's rebudding romance. I loved watching Ashley get to know her husband all over again. I had high hopes for the latest book for that reason.  Vaughn Miller's been released from prison following a wrongful conviction. He's back in Catalina Cove to start over. Two years in prison taught him who his true friends are.  Sierra Crane suffered two blows at once. At the same time, her best friend was losing her battle against cancer, Sierra learned her husband was unfaithful. Worse, he wanted nothing to do with Sierra's goddaughter, a young girl Sierra vowed to take care of when her friend died. After her divorce, Sierra moved herself and Teryn back to her hometown, Catalina Cove, to start a new life running a cafe.  It's at her cafe that Sierra meets Vaughn. She knew of him as he was a few y
Post a Comment
Read more
More posts