Showing posts with the label naima simone
Show all 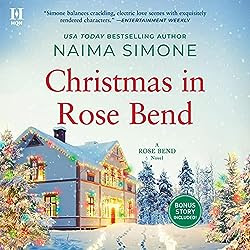 Release Date - October 26, 2021 Naima Simone's Christmas in Rose Bend was my introduction to Rose Bend. The charming town drew me in and made me wish I was there. It's a quintessential New England village filled with characters you want to become friends with. Nessa Hunt takes a leave of absence from her work as an ER nurse. The only man she's ever known for a father is dead, and she's now the guardian to a pre-teen sister she's spent little time with. Ivy isn't happy to be with Nessa, and it's proving to be challenging from the start.  For Nessa, his death is equally bittersweet as her mother's death a short while back also left her reeling. She learned during her mom's death bed confession that the man she thought was her father isn't her father at all. Despite the internal and sibling conflicts, Nessa is going to do what her "dad" asked of her and take Ivy to a small town called Rose Bend for the holidays. Upon arriving at the inn,
Post a Comment
Read more
More posts