Showing posts with the label lady sunshine
Show all 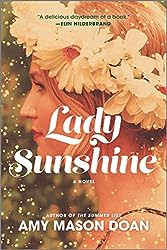 Release Date - June 29, 2021 Lady Sunshine moves seamlessly between the 1970s and the 1990s in order to tell Jackie Pierce's story. She, her father, and her stepmother don't get along. When they decide to take a trip without her, Jackie is sent to stay with her uncle for the summer. She doesn't know too much about her mom's brother other than he's a talented musician, but she's overjoyed to have some freedom from them. Her uncle owns a sprawling estate on the Californian coast. The Sandcastle is a retreat of sorts for musicians, artists, and their families. There, Jackie finds freedom and friendship with her cousin. But, before the summer is over, tragic events will change their relationship for good and lead to Willa's disappearance. In the 1990s, Jackie inherits The Sandcastle following her aunt's death. She returns with the plans to sell it, but before that happens, she learns her aunt asked a musician to record a tribute album. She agrees to let
Post a Comment
Read more
More posts