Showing posts with the label hannah mary mckinnon
Show all

You Will Remember Me - Hannah Mary McKinnon 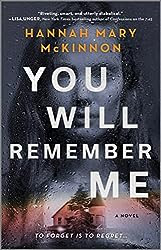 Release Date - May 25, 2021 A man wakes up on a beach. He has no idea who he is, how he got there, or why he has a huge gash in his head. Thoughts of Maine are strong, so he hides in an RV for the trip north. Meanwhile, a man's girlfriend cannot find him. He was going out for a swim and never returned. Lily Reid learns that Jack wasn't his real name. Why he lied is beyond her. In Maine, Maya Scott is stunned when her brother randomly returns after disappearing. She's delighted that he's back, but he's clearly suffering from amnesia and doesn't seem to remember anything about his past - a past that involved two girlfriends vanishing. You Will Remember Me is one hell of a psychological suspense. It takes the reader on a wicked ride as you learn more about each character and the lies they tell. Here's the kicker, the ending, which I knew it was coming, still had me in shock. From start to finish, this book takes you on a journey that will stick in your head
Post a Comment
Read more
More posts