Showing posts with the label dial a for aunties
Show all

Dial A for Aunties by Jesse Q. Sutanto 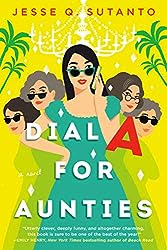 Release Date - April 27, 2021 Meddelin Chan's mother has done it this time. Meddy learns that her mother has been on dating sites posing as Meddy, and she's landed Meddy a supposed dream beau. Only, he turns out to be a demanding handsy guy, so Meddy protects herself by tazing him. Suddenly, Meddy is a killer. It's time for Meddy to do the only thing she can think of. She calls her aunties and mom. They decide to help her get rid of the body and save the day. The problem is that they're in the middle of one of the biggest weddings they've planned, arranged, and catered, so the dead body is going to have to stay hidden until they can dispose of it.  Unfortunately, the cooler where they've hidden the body is accidentally packed up and sent to the island where the wedding is being held, which makes it even harder to keep hidden. Worse, the love of Meddy's life is back in town and very interested in reconnecting. Nothing more could go wrong, right? Dial A For
Post a Comment
Read more
More posts