Showing posts with the label cara thurlbourn
Show all

The Boy Who Lived in the Ceiling: An Arnhurst Novel by Cara Thurlbourn 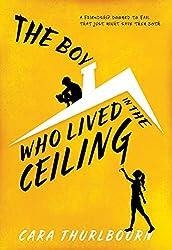 Release Date - July 8, 2021 Freddie never dreamed his mother would die when he was only a young boy or that his father and step-mother turn their backs on him and leave him in the street to fend for himself. Now homeless, Freddie does what he can to keep himself fed, sheltered, and clothed.  While walking down the street, he spies on a family leaving on a trip. The teen daughter catches his attention, and in the rush to get to the car, she leaves her journal stuck in the door. Freddie retrieves it and realizes the door is unlocked. He knows he shouldn't, but he uses their home for the three weeks that's marked on their calendar.  Violet is having troubles of her own. A three-week ski vacation isn't her dream trip. She'd rather have spent her school break with her friends. Her parents fight all of the time. Her brother stopped speaking, and no one is able to get him to speak again. Plus, she's being forced to move to a public school, which has her friends leaving
Post a Comment
Read more
More posts