Showing posts with the label T.J. Newman
Show all 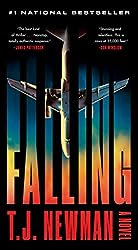 Release Date - July 6, 2021 As the pilot of a plane with 143 souls on board, you're given the impossible choice. Crash the plane or kill your family. Those are the choices Captain Bill Hoffman is given. He can either save his passengers and kill his wife and children or kill the plane full of people and save his family. He tells the terrorists he refuses to do either. Can he figure out how to save everyone in time? This book had me on the edge of my seat. It's sad and a little too close to reality at times. I'd say I loved it, but the ending lost me a little. It became a little too "All-American," but I don't want to give any spoilers.  Despite this, there were two things that made the book stand out. One was that you got to see the situation through the terrorist's viewpoint. I also loved that the details from the flight attendant's point of view were detailed and drew you in.  Right now, I've been saying that Hollywood seems to be in a slump a
Post a Comment
Read more
More posts