Get Harlequin e-Books for Half Price

During periods of self-isolation, reading is a great way to spend the time. Load up your e-reader thanks to Harlequin. Right now, all Harlequin e-books are on sale for 50% off. The sale currently does not have an end date. 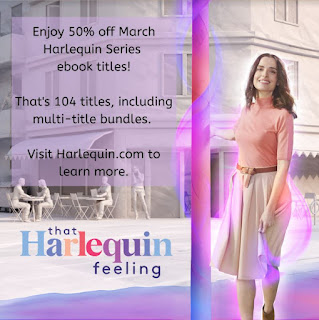 Get the latest novels from bestselling authors like Heather Graham, Brenda Jackson, and Susan Mallery for $3.99 or less. Many titles are available for just $1.99. Get entire Harlequin box sets for $7.99 or less.

Now is the time to stock up on romantic suspense, historical romances, contemporary women's fiction, and much more. Visit Harlequin and browse the e-book sales.
By Tracy - March 25, 2020 No comments:

The Other Mrs. by Mary Kubica

The Foust family moves from their busy lives in Chicago to a remote Maine island. Sadie's a doctor who will be very busy seeing patients. Her husband is going to step things up and be a stay-at-home dad as he adjusts to becoming the guardian to his teen niece. When their neighbor is murdered one night, Sadie cannot help but worry. A witness claims she was arguing with the victim before the murder, Sadie knows she was busy seeing patients.

As the ties between her family and the victim start to come to light, she becomes more desperate to keep her family safe and fit into a community that doesn't seem to love having this family of interlopers on their island.

I adore Mary Kubica's novels. They're always packed with plenty of chills, unexpected twists, and excellently penned suspenseful plots. I ended up predicting one of the twists in The Other Mrs. way too early. While I still read every page, I found that knowing one of the big twists took a bit away from my enjoyment.

The setting is fantastic. Maine is my favorite place to be, and I could imagine myself on this island smelling the briny air and cool wind. While this isn't my favorite of Kubica's novels, I still say that readers need to pick up a copy and enjoy the setting, characters, and suspense that it delivers.
By Tracy - March 22, 2020 No comments:

If you missed the release of The Sea Glass Cottage yesterday, you need to take a closer look at this touching contemporary romance. Thanks to HQN Books for inviting me to be part of their blog tour. I've been a fan of Ms. Thayne's for a while, and this is one of her best.

After her mother is injured in a fall, Olivia Harper opts to head back home to a place she thought she'd never see again. The timing is right as she's just experienced an event that's left her shaken. Her teenage niece is not pleased to see her. Her best friend is, however, and her friend's brother is also back in town and sparking age-old flames. She returns determined to keep the true reason for her sudden return secret.

Olivia is not the only one hiding something. Her mom knows something that she hasn't revealed to her daughter or niece. While it's something they should know, she doesn't have the heart to tell them. Olivia's niece was raised by her grandmother after her mother overdosed. Caitlin is also hiding a very big secret, and it's one that could threaten their family structure.

Here's what Ms. Thayne offered as insight into the origins of this novel.

"What made you write this story? (The story behind the story)"

That’s a very long “story behind the story”! My husband of 34 years was adopted at birth to a
wonderful loving family and never knew anything about his birth parents. He was never really
interested, though I always wondered. He took a DNA test a few years ago before going in for a
major surgery, just out of curiosity so our kids could know something about his ethnic heritage,
and was astonished a few months later when results from Ancestry.com came in linking him to
several close relatives on his maternal side. He wasn’t going to do anything about it but through
a very strange sequence of events, he eventually connected with three half-brothers, an aunt
and several uncles (including one who has been our neighbor and friend for more than twenty
years without either us knowing the connection!). Unfortunately, my husband’s birth mother died
several years ago so he never had the chance to meet her but my husband now has a
wonderful relationship with his brothers, who have embraced and welcomed him. I have heard
of these kind of stories before and after living through the amazing results from a simple DNA
test, I wanted to write about someone trying to trace her father. That’s one of the underlying
subplots to The Sea Glass Cottage.

The Sea Glass Cottage is told from three perspectives and each one is endearing. You'll get to know the secrets pretty early on, so you have that advanced knowledge. I admit I teared up multiple times. I adored the characters, the beach setting, and the blossoming friendships and romances. This is a book I can see myself reading again and again when it needed something uplifting and emotional.

In the first A.L. McKittridge novel, detectives A.L. McKittridge and his partner Rena Morgan are working long hours trying to stop a serial killer. Four women are dead, exactly 10 days apart, and there seems to be no link between the women.

Once they do find the link, time is quickly running out. They only have a link as to why the women are connected, but the killer's identity is still a mystery that they must solve if they're to keep the next potential victim safe.

That's the mystery, but there's a lot more to this story. A.L. is divorced with a teen daughter. She's starting to make some wrong choices. Teen or not, his role as a dad is to keep her safe, but the long hours he's working are making that difficult. Rena and her husband are trying desperately to have a baby, and the infertility treatments are all too consuming. Her husband is pulling away and she fears he's having an affair, but she can't push work aside to focus on what he's really up to.

With the blend of personal stories and mystery, Ten Days Gone was an engaging read. I had a hard time putting it down to get much-needed sleep. If you want a story that will keep you hooked, this is a great choice.
By Tracy - March 15, 2020 No comments:

Charlie Miller is new to town. She hopes the decaying beach cottage she's purchased will give her a new start. You see, she used to be known as Steffi and is fresh out of prison where she's served her time after providing a false alibi for the love of her life.

Despite her new name, new look, and new home, she has the feeling that someone is lurking in the woods. Someone is determined to make sure she's not allowed to start fresh and have her happily ever after.

The very first chapter begins with a woman's death and the police detectives saying they should have done more. That sets the stage for the novel that is told when Charlie is Steffi and after the release from prison. There is a good deal of creepiness, mainly due to the area and the unusual townspeople who Charlie befriends, but it is developed slowly in such a way that you do keep guessing. Is someone really after Charlie or is all in her head? lf someone is after her, how did they find her when so many precautions were taken to keep her new identity secret?

I enjoyed Safe House. I did have issues with how everything played out. Without giving spoilers, I just felt that there were so many other ways Charlie's past and present could have collided. In the end it felt rushed and unsatisfying.
By Tracy - March 09, 2020 No comments:

The Road to Christmas: A Sweet Holiday Romance Novel by Sheila Roberts

Release Date - September 20, 2022  Sit down and explore the holiday season through four sets of eyes in Sheila Roberts' latest holiday...