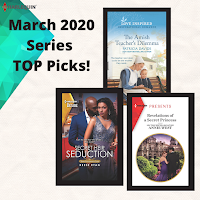 Welcome to a sneak peek into Harlequin's March 2020 releases. Each month, readers find dozens of new books to indulge in. From princesses to missing children, there's a lot in store for readers who want to curl up and get lost in an engaging story this March. For this month, my standout picks are:

Starting with Secret Heir Seduction, Reese Ryan's story takes you on a sizzling journey to Texas where sportswear fashion mogul Darius Taylor-Pratt is in town hoping to land a partnership. Things go awry when he learns his birth father was a very, very wealthy man and that he's really the man's long-lost heir. He's also not amused as he's never heard from or even of this man.

Worse, or maybe that's better, Darius' rental home neighbor is his ex-flame. He broke her heart for reasons known only to him. The sparks between them cannot be ignored, and he doesn't want to mess things up this time.

There's a lot to like with Secret Heir Seduction. The sparks between Darius and jewelry designer Audra create fantastic romantic tension. Romances need conflict, but I saw this conflict coming way too early. As I could see exactly where things were going, I found myself almost annoyed when it reached that point. All was good, however, as the conflict didn't get drawn out for long.

Oh how I loved this story. Of the three, this one was clearly my favorite. Twenty-five years ago, seven-year-old Halle Lane's best friend disappeared. He walked home from school and was never seen again. Fast forward a quarter of a century. Halle is a reporter and asks to do a look back at his disappearance. This includes getting his mom to talk, which could be a problem since his mom refuses to talk to reporters.

Liam Hart is happy at his family's vineyard. When he gets Halle's story in the mail, he cannot figure out why anyone would have sent it to him. He lives on the other side of the country to Winchester, Tennessee. It's the photo of the young boy in Halle's story. That young boy could be his twin.

In this Harlequin Intrigue release, you have Halle who has very clear memories of her friend. You have Liam who cannot ignore the similarities between this boy and his own childhood photos, but he's never been to or visited Tennessee. That leads him to question everything Halle suggests. Despite it all, the pair can't help but ignore the connection they feel. The combination of those romantic feelings, the mystery regarding the young boy's disappearance, and the present day mysteries that keep popping up as Halle digs deeper turned this into a story I could not put down.  Before He Vanished had me hooked.

The final pick this month is Annie West's Revelations of a Secret Princess. My heart broke a little for Caro/Princess Carolina. She finds herself at Jake Maynard's doorstep. She'll do anything to get hired to be the nanny for his young niece. Her parents were killed in a tragic accident, so the young girl has been uprooted from her home.

What Jake doesn't know is that "Caro" is a princess. She's come across proof that the baby she was told died during birth survived. She will do anything to be close to her daughter, but she also knows that Jake will do anything for his niece. Convincing him otherwise will never happen.

I cannot imagine going through all that Caro endured. I loved that this story never really focused on adding too much extra conflict to an already conflicted set of characters. They had a lot to process, many feelings to explore, and watching their choices and interactions play out was a dreamy ride I am so glad I got to take.

Are you new to Harlequin? Get ready for memorable series and standalone stories that are all just the right length for that lazy afternoon, bubble bath relaxation time, or those moments when you need to kill time before an appointment. They've always been my pick for light, romantic, satisfying stories that stick with me.

Thanks so much to Harlequin for letting me be part of this tour. Here are a few more things to know about this publisher.


Harlequin Series celebrates 70 years of feel-good entertainment! Founded in May 1949 and a pioneer of the category Series romance model, Harlequin is a globally recognized brand with offices all over the world.
Unique to Harlequin are the category romance novels, which are short romance novels, usually no more than 200 pages, and about 55,000 words. That means you can finish a book in 2-4 hours, making them perfect binge-reading! Plus, they’re great for the budget-conscious reader, with print prices starting at $4.99 and ebook prices starting at $1.99.
Many well-known authors have written for Harlequin Series, including Nora Roberts, Brenda Jackson, Jeannie Lin, Sarah Morgan, Farrah Rochon, Debbie Macomber, Jayne Ann Krentz, Robyn Carr, Heather Graham, Susan Mallery, RaeAnne Thayne, and the list goes on!
Harlequin Series has twelve lines, with 66 brand new novels available each month. Turn the page to discover your favorite Harlequin Series line!
Did you know?

By Tracy - March 05, 2015
Release Date - March 2015 Benjamin Chaud Chronicle Kids Farewell Floppy is a reissue. The original release was in 2010, under the French title Adieu Chassette . This poignant tale tells the story of a boy and his rabbit. Fans of The Velveteen Rabbit may find a lot to love in Floppy's story. Figuring it unfair to keep his rabbit, the boy wanders deep in the woods where he plans to leave Floppy behind. Floppy can start a new, happy life with other rabbits and wildlife. Only, when Floppy actually leaves, the boy has changed his mind. It may be too late to get his best friend back. Not only has Benjamin Chaud written a poignant tale about pets being more than pets, he's also illustrated it beautifully. Colorful images paint the story, so even for children who cannot yet read, they'll still be able to look at the pictures and get an idea of what is happening on each page.
Read more