By Tracy - January 18, 2010
After reading Joanne Fluke's Plum Pudding Murder, I was somewhat disgusted by the thought of Pork & Beans Bread. However, I also happen to know that she's a great cook and nothing she's ever dished up has been inedible.

The more I thought about it, the more I wondered if it was possible to turn a soupy can of pasty beans into something delicious. I had a friend who'd given me boxes of canned food she'd inherited and couldn't use, so I decided to give it a shot.

Essentially, Pork and Beans Bread is the combination of sugar, eggs, flour, vegetable oil, leaveners, cinnamon and walnuts or pecans. I opted for walnuts because: a. they're cheaper and b. I like the taste of them. 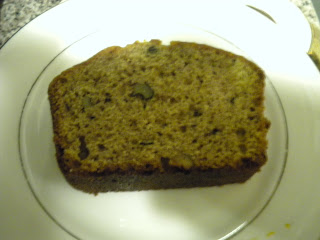 With that, I put a can of pork and beans into my blender and pureed it to a mushy mess. Because it was very thick, I went a step ahead and added the oil to the mix in the blender too, though the recipe didn't state to do that. I poured that mix into the remaining ingredients, turned on my Kitchenaid and let it do the work. After pouring the batter into two prepared loaf pans, I put them into the pre-heated oven and crossed my fingers.

At this point, there were two options. One, the bread was disgusting. Given the recipe came from Joanne Fluke, I figured it might surprise me, kind of like Campbell's tomato soup cake which is my favorite of all non-chocolate cakes.

The smell that filled my home was great. The bread smelled very much like zucchini bread. After it baked and cooled, I cut myself and my husband a piece and both of us were delighted with the results. It tastes a little like pumpkin bread and zucchini bread, but with a twist. It certainly is edible and he's already said anytime I want to whip up another batch, he'd be happy to bring it to work.


I have not received any compensation for writing this post other than a free digital or galley copy of the book.
Thanks to Netgalley and the publishers and authors for providing many of the books you see reviewed here. If you would like your book reviewed, I accept digital copies only through Edelweiss or Netgalley.